Weds was another full day on the boat in Chobe. It was again totally magical. I went fishing in the morning with Nigel, Mom and Bevin. I kept my streak of getting the first fish of the day for the boat, although it was small. Not that I am competitive or anything 🙂

We started with spinners and caught a few small tiger fish. Later we used the fish we caught as fillets to bottom fish for big Tigers. We all had some big bites but none of us were able to land any big Tiger fish. Nigel had two huge bites with fish jumping clear out of the water. One of them cut the line with his tail! I had a few big bites but my line snapped a few times.

We tied up several times inear some big rocks and some rapids. At one point when we all had lines in at the bottom I saw movement in the ripples in the sunshine. We realized it was a big croc (no swimming in the Chobe!) and it was heading straight for us. Slowly it made it’s way towards us, swimming against the current. At one point, when he was no more than ten feet away, he turned and looked at me, it was creepy! Finally, with a small flick of his tail, he submerged and was gone.

Mom was the star of the day, she caught two huge catfish (barbels, they call them). They put up a good fight. The tigers are catch and release, except when we used them for filets. Apparently they are very bony. But the catfish were keepers for Bevin. He called his wife on the mobile phone and we left them on the bank by the Namibian immigration station. He told us they would fry them or boil them in pot. It was funny how we just tied up at the station and he jumped out, lay the fish in the shade and we left them there for his wife to come and take.

We returned to the boat with our tall tales and had another delicious brunch. Afterwards we all crashed out napping (fishing is hard work). Emily woke me up an hour later to say that there were elephant on the opposite bank as far as the eye could see. Dad said he counted over 100. we all sat at the table for an hour and just watched all the action. It’s like the nature channel out the front door. There were also bunches of hippos with their hwahh hwahh hwahh chuckles, too many ellies to count and lots of impala. We saw a heard of sable (very dark haired long horned antelopes, and Dad’s favorite animal) come down to the river to drink.

Later in the afternoon Dad, Nigel, Ted and Steph went fishing and the rests of us went out on a game ride. We went down to the rapids again where we were fishing, to see the whit breasted cormorants feeding their their babies. In the same tree were loads of yellow billed storks with their fledgelings. It was so cool to watch it all. We saw a ton of birds on that trip, bee eaters, fish eagles feeding their chicks, Yellow billed kites… Too many to name or remember. 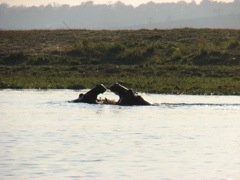 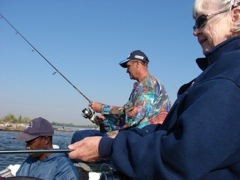 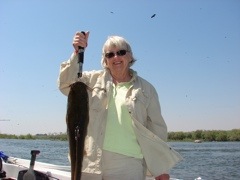 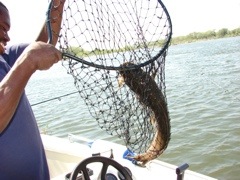 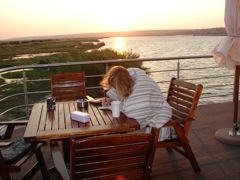 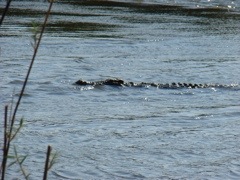 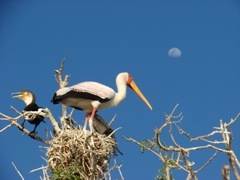 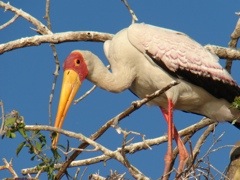 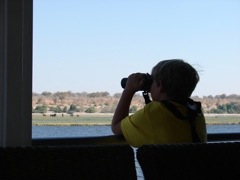 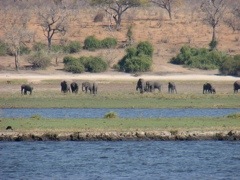 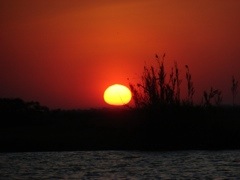