Wherein I describe my happiness and preparations for a day at Hogsmeade/Hogwarts: 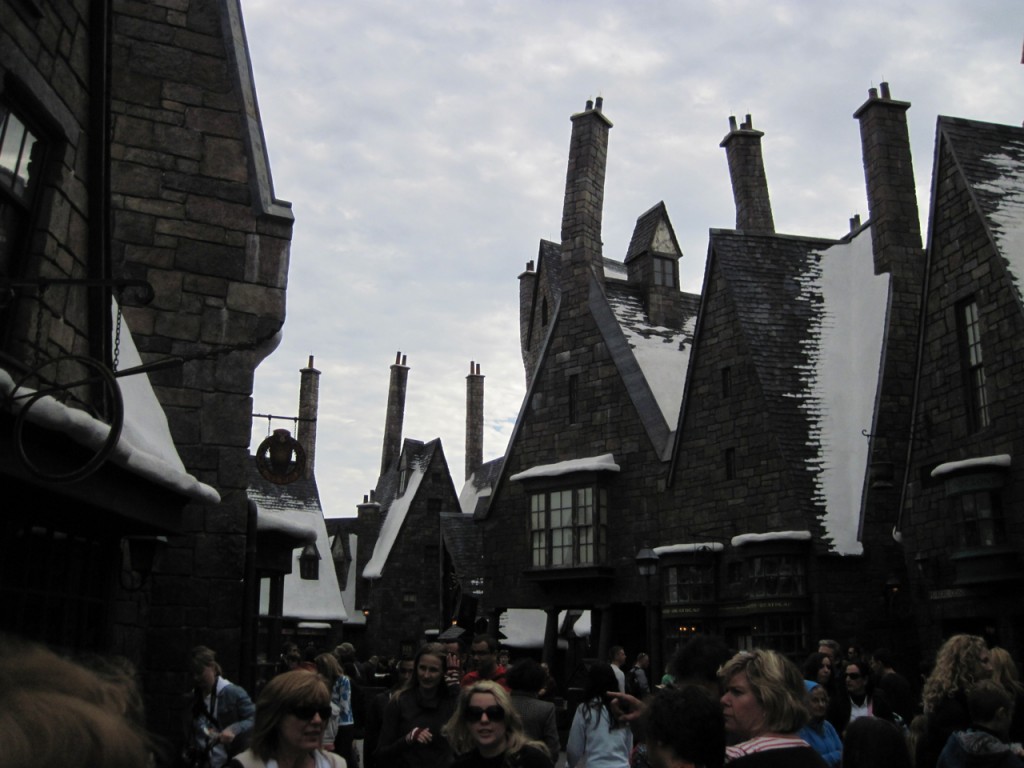 If you were to ask me what my favorite book was (it’s a long list, so don’t ask), Harry Potter wouldn’t actually make the list. Because Harry Potter should never, never have to make anyone’s list. It’s not only understood, it’s not necessarily a book to me anymore. As my friend Ella (Ella is practically my cousin), Kate, and I said coming out of Movie Eight, Harry Potter was more like childhood and a piece of our souls than a book. We cried all the way through the movie. So yeah, I’m a Harry Potter freak, I go as characters for Halloween, honor significant Wizarding dates by wearing my cloak to school, and manage to make about a reference a day, as well as writing fanfiction. But when it comes down to it, I’m also a stickler for the actual books themselves, and if I can quibble about what happens in the movies that’s wrong, and I always can, rather vehemently, then I can clearly find quite a few issues with a theme park. None of this stopped me from squealing like mandrake and getting excited every time I remembered we were going to go to Harry Potter World.
I said before we left that I was going with no expectations and a pocket full of hopes, in an attempt to keep from being disappointed. That would have been one of the worst things I could think of.

Walking through the other parks, I began to expect less than I had previously realized I did, and yet, there was a part of me that was already mounting a broom and beginning to soar. I had picked my outfit three days before, one of several I have stored away for wearing to school on Harry Potter days. A navy pleated skirt, a short-sleeved button down I got for Christmas, silver tights and witchy boots with something of a heel, and a cloak that used to be my friend Emma’s. I spent the car ride from Charleston making various repairs, and sewing a cloak for my sister. I put quite a lot of thought into costuming, as well as bringing no fewer than four of the Harry Potter Series with me. I’d done research; I knew where to go and what I wanted to do, as well as solicited reviews from my friends on everything from food to ride content to the lines themselves. Mom and Dad had done research as well: our tickets had been bought online and printed out, saving us twenty minutes in line.

When I saw the castle turrets, Hogwarts castle turrets, over the pastel rooftops of Dr. Seuss Land, something in me snapped. I skipped over the cobblestones. We had a false start in believing the world of the lost continent was what we were looking for, it felt vaguely medieval and everything. But then, past all of that, was something—I’m romanticizing this. And I’m not going to finish this post in a million years if I romanticize everything. Suffice to say, Hogsmeade (the magical town attached to Hogwarts school of witchcraft and wizardry, actually located somewhere undefined in Scotland) was packed with more people than we had seen in all of the other parks we’d passed through to get there, combined. Staff members were dressed in pinstripes, goofy hats, ministry of magic cloaks, the sort of clothing we saw on adults in the middle movies, quirky, modern-day steampunk attire with velvet trim and lots of stripes. Kate, who had not begun to wear her cloak, and I were holding a count of how many people we saw wearing cloaks. Kate believed that Ted and I were nutters for wearing cloaks and other paraphernalia, but there was an abundance of people in “funny clothing” (Vernon Drusley, Philosopher’s stone) in the park, but I was one of the only people not wearing movie replica cloaks (I prefer mine, kudos to Emma’s awesomeness).

View all posts by Emily Fairchild →

2 Responses to Harry Potter: Post 1 of about a million