By Judy
It’s hard to describe Maun. Officially the gateway to the Okavango Delta, Maun is an interesting place of its own. Stephanie lives on the outskirts of town, but everywhere you go she knows someone. The main streets are paved (known as “tar roads”) but the sidewalks and some of the side roads are packed earth. Since it is the dry season, dust is everywhere. Donkeys and goats and even horses roam the streets, and we have to stop fairly often to allow them to cross the roads. Gorgeous birds flit across our path as well.

The air is incredibly dry. We wash clothes in Stephanie’s washer, and hang them to dry under the stars. It will only take a few hours for them to be totally dry, even at night. The frogs and toads make an incredible racket at night, and there is a hippo snorting in the river behind her house. We can hear some sort of announcer getting closer and closer, and ask Nigel about it. In Setswana, it is some sort of announcement for people to know about a community meeting, and though many people have cell phones, driving around with a message is still an effective means of communication. Eventually, the announcer moves elsewhere, and we are left with just the noise of the frogs and toads. It is still warm late in the evening, and the mosquitoes have just begun to come out, so we wear bug lotion, and sleep under mosquito netting.

Before leaving on safari or even going on our river adventure, we need to shop for some necessities. The main grocery store in town is called Spar, but there is also a Woolworths here. Cine had explained that Woolworths is a high end grocery and clothing store in Johannesburg, but it is a long way for them to import perishables. Apparently, the local Woolworths has just begun receiving a truck of fresh produce every Friday, and it is a bit of a social event to show up on Fridays. We are impressed with the quality of the produce. The groceries are very fresh, and we buy beans and mushrooms, cucumbers and bread, and fruit sodas for the kids. We move on to the next larger grocery, spar, for laundry soap, chicken, foil, butter, and snacks.

Christie has talked about our riverboat cruise in a previous post, but it was so interesting to see how much water there is, compared to what there usually is. The water in the river begins in the rainy season in Angola, eventually making its way through the network of marsh that is the delta, where it eventually seeps into the sand rather than seeking an ocean. There have been some incredible documentaries filmed on this area, catching footage of the birds arriving on the heels of the water as it pushes through the delta. This year, the water is incredibly high, and has surpassed last year’s record. We pass a sign for the River Lodge that is reflected in the water… It is only inches above the surface… In other years it is the top of an arch people walk under. The water is cold and the day is very hot. Steph brings Blaze along, and eventually we find a beach for swimming. Interestingly, we share the spot with cows, which walk along at chest height in the water and graze the tops of the grasses.

At the end of a great river day, we pack for safari. 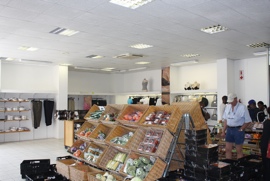 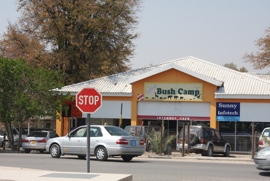 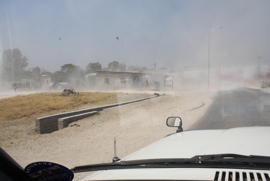 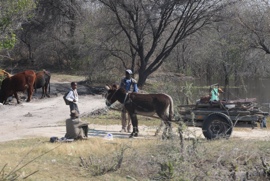 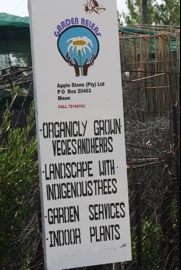 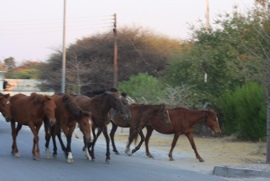 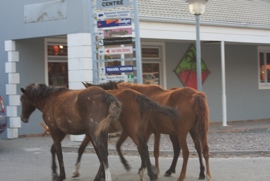 One Response to Maun