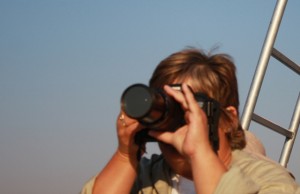 this is me fishing

As I have previously mentioned, I wasn’t exactly the most focused angler on this trip. I loved being on the water, and watching the birds and wildlife, but I lacked the concentration for fishing. At one point, we had headed for a fishing spot on the Chobe/Zambezi over near the Namibian customs/immigration office. As we drifted in the early quiet, I could hear a cacophony of squawking from the area beyond the rocks. 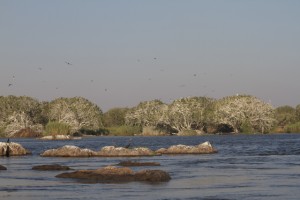 When I asked what it was, the answer was “that’s the rookery for the storks and cormorants.” As we watched during the day, the storks (yellow-billed and openbills) flew off in search of food for their young. Early in the morning, huge flocks of birds flew one direction, floating on the thermals. Later, they flew back the other way, and this was repeated again in the afternoon. So that evening, we took our “game drive” to the rookery.

It was breathtaking. The trees were literally covered with birds and nests, and the adults swooped in to screeching babies. The moon was lit by the setting sun, and the birds, in their finest breeding plumage, were absolutely gorgeous.