It has been really fun to have a mission every morning. We have been up around 7 every day and out the door by 8:30. We take the number 18 tram, which stops nearby, about 7 stops. The first day we had a bit of trouble finding the place, but we had left plenty of time. We knew what stop it was, but the street was a bit hidden, and beyond the range of our guidebook maps. We asked several people, and finally a guy with a Garmin found it for us and we were set.

Ivan’s studio is behind a big blue door that opens into an alley. It’s enough for a car to go through. There at several shops, mostly mechanics, I think back there. His studio is a large, open space. Maybe 25 x 40 feet. His work is cool. He likes to combine ceramics with old metal from silverware, candlesticks, door handles, etc. He has good throwing skills, but maybe is not who I’d recommend for a beginner. Clare has been doing great, but I just don’t think he has much experience or interest in teaching someone that has never worked with clay. There also isn’t much of a program that we are following. Its a very loosely structured affair. We were a bit worried about the timing, and being able to take something home. That was well founded… I will probably only take bisque with me and Clare, Melissa will maybe get him to ship stuff. I have realized how lucky I have been at Claymakers… The professionalism of the teachers and studio are really quite amazing, nd I guess out of the norm.

The classes run from 9 am – 1 pm. It does go fast. The first day we all spent time throwing on the wheels. There are only 2 which is less than ideal. I started out making figurines. This was interesting, since I haven’t ever used a mould, and don’t really do sculptural work. I also threw a few bowls and pitchers. Ivan thinks they are too heavy and thick, which they are, and has had me working on getting things much thinner. His wheels are different than I’m used to – electric, but you have to keep your foot on the “gas” and they speed up quickly. So it’s more to think about. His clays are also pretty soft, so there were more than a few frustrating moments. Melissa and Clare are also working with slabs. Clare has a big bowl that she made from a mould that used to be a lampshade from Ikea. Melissa made a large “boat” bowl that has turned out pretty cool, as well as several small plates from slabs. It is definitely fun to have a craft project to do every day.

Tuesday we continued on working, I threw about 8 pieces, trying to be tall and thin and less clay at the bottom… I cut each one up though and, while the bottoms got thinner, the sides were all exactly the same! Oh well. It’s good practice. I showed Ivan how I make my handles and he showed me his way… I’m very impatient pulling it off the pot so I will likely stick to my method.

Wednesday we spent decorating all the pieces we want to get in the bisque kiln. I tried a bit of relief work (loosely patterned after some of my friend Andy’s stuff) and played around with the slips. Clare decorated her big bowl with bubbles, trimmed her bowls and Melissa made more plates. We plan to glaze on friday.. So Today we are not sure what the plan is. But we are really enjoying it! 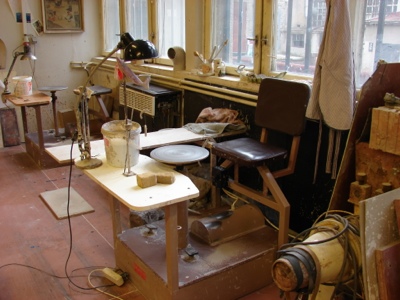 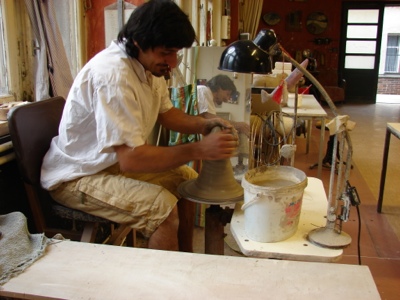 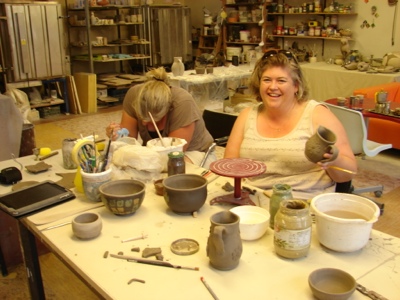 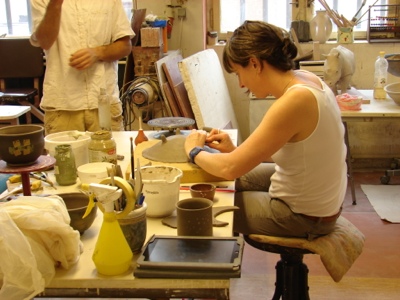 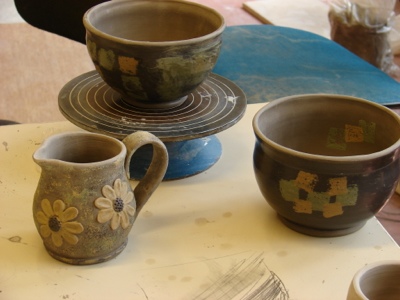 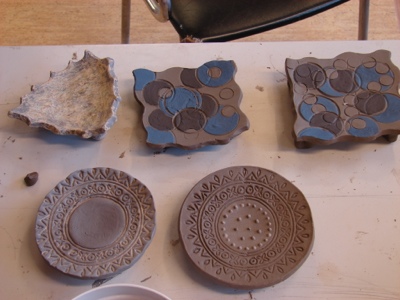 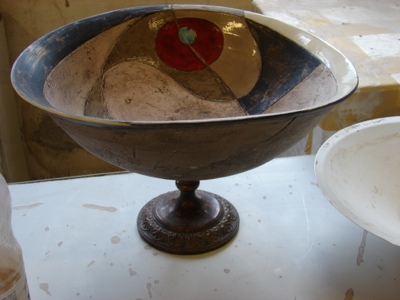 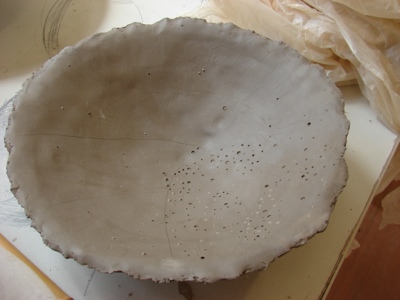 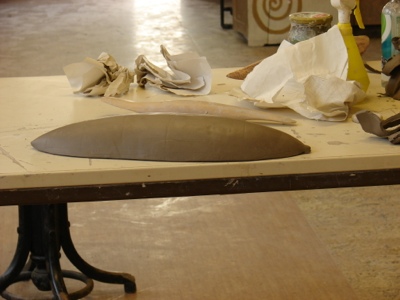