I did not actually see leopard babies, but here is a follow-up to Kate’s post on the leopard cubs. 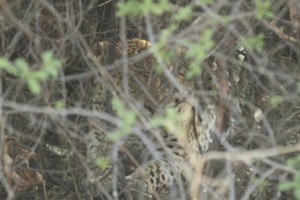 Leopard hiding in the brush

Our first game drive, and I am in Darryl’s car, and we head over to see where the water is in the new marsh at Savuti.  We are watching a large crocodile sleep on the bank in the sun when the radio crackles to life.  “Darryl?” Colin asks.

“We’re watching a crocodile on the bank”, answers Darryl.
“Yeah, this is more important,” Colin replies, and gives Darryl some directions.  We’re  not exactly sure what the location is, but several times Darryl tries to move his taller vehicle through the brush to get to Colins location, but can’t navigate the thick tangles of branch and thorn.  Finally we come upon the other car.  “leopard,” they whisper… “female, with cubs.”
We maneuver our car up close, but can see nothing.  There is a big branch with mud on the end, where the cubs were playing earlier, but they have retreated into the relative safety of the hollow log.
The mother, however, is right next the the vehicle, watching us from within a tangle of branches, under a bush.  I would never have seen her, and we are disconcertingly close. Ted and Reggie were delighted to show me the photos they took, and Kate was thrilled to see such tiny babies.  Colin estimates that they are less than two weeks old.  I never do see the babies, but perhaps I am in good company; another guide who happens along describes sitting there with a professional photographer for six hours the previous day… And the babies never came out of hiding. 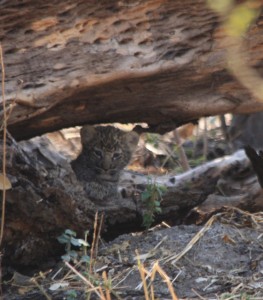 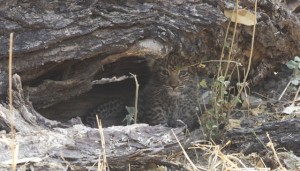